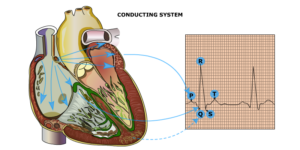 The human heart beats at a particular rate and with a particular rhythm. When there is a problem in either the rate or rhythm of the heart beat or when both are disturbed, the condition is called arrhythmia. So an arrhythmia could be due to heart beating too fast (tachycardia) or too slow (bradycardia) or with an irregular rhythm (for example extra or premature beats).

Electrical signals originate in a group of specialized cells called pacemaker node, located in the upper right chamber of the heart (right atrium). In a resting healthy heart, pacemaker node generates 60-100 electrical impulses in a minute. These impulses are conducted via a special conducting system to the right and left atria (upper chambers) which contract to pump blood into the right and left ventricles, respectively (lower heart chambers).

The electrical signal then reaches across and down the length of the heart and ventricles through specialized conducting pathways to ultimately activate the left and right ventricles. The right and left ventricles contract to push out blood to lungs and rest of the body, respectively. After this contraction, the ventricles relax, and a fresh impulse is generated at the pacemaker node.

Arrhythmias can occur without signs and symptoms or cause mild ones such as:

Serious symptoms of arrhythmia include:

During your physical examination, your doctor may:

Your doctor may or may not opt for these tests depending on your symptoms.

Arrhythmias which cause symptoms and are serious can be treated with medication, medical devices and procedures, surgery and Vagal maneuvers. Serious arrhythmias are those which are likely to cause complications like stroke, heart failure and sudden cardiac arrest.

Apart from antiarrhythmics, your doctor may prescribe blood thinners or medicines to control thyroid disorders.

Simple exercises can slow down or stop abnormal heart rhythms by affecting the Vagus nerve. However, please do not do these exercises without consulting your doctor.

Vagal maneuvers which can help are: